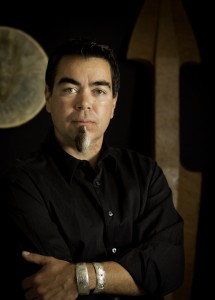 Da-ka-xeen Mehner (Tlingit/N’ishga) uses the tools of family ancestry and personal history to build his art. Born in Fairbanks, Alaska to a Tlingit/N’ishga Mother and Hippy/American father his work stems from an examination of a multicultural heritage and social expectations and definitions. Da-ka-xeen was raised in two environments, one as an urban Native in Anchorage and the other as a rural Hippy in Fairbanks living without electricity, running water or phones, and heating the house with a wood stove. In particular his work has focused on the constructs of Native American identity, and an attempt to define the Self outside of these constructs. He uses the materials and tools of his family to express himself. From the steel and concrete of his Labor Union father, to the crook knife and cedar of his Alaska Native ancestors, Da-ka-xeen Mehner’s artwork reflects his heritage. In an expanded view of “tradition,” Da-ka-xeen also includes the inherited tools and skills of photography that were passed down to him from his maternal Uncles.

Da-ka-xeen received his A.A. from the Institute of American Indian Arts, and his B.F.A. from the University of New Mexico. From 1994-2000 Mehner served as the founder and director of Site 21/21, a contemporary art gallery in Albuquerque, NM, and was a founding member/owner of the (Fort) 105 Art Studios in downtown Albuquerque in 1998. Da-ka-xeen returned to Alaska in 2000 and earned his M.F.A in Native Arts from the University of Alaska Fairbanks in 2007.

His work in photography and sculpture has been exhibited from New York to California; Alaska to New Mexico. Collections include the Anchorage Museum of History and Art, the University of Alaska Museum of the North (Fairbanks, AK), and the Museum of Contemporary Native Arts (Santa Fe, NM), C.N. Gorman Museum (Davis CA) and the Alaska State Museum (Juneau, AK). His work has been featured in the art magazines Sculpture and American Indian Art, and in numerous newspapers, art catalogs, and blogs. He is an Assistant Professor of Native Arts at the University of Alaska Fairbanks, and the director of the UAF Native Arts Center.